On Chaos and Determinism


Hero of mine, chaos theory pioneer Edward Lorenz, gifted us with the term “butterfly effect.” Simple idea – the slight atmospheric disturbance created by the flap of a butterfly’s wings could, through a chain of events, result in a typhoon or hurricane 10,000 miles away.

What the meteorologist was attempting to explain was why long-term weather predictions were so infeasible.


Popularly used in fiction including time travel stories, this “butterfly effect” has come to be construed as how the smallest thing, a single person, can change the course of history.

My interpretation is not only different, but contrary: deterministic.

The point isn’t that a butterfly’s wings “causes” a hurricane, but rather that conditions are set so that the slightest catalyst will put the wheels in motion. If not the butterfly, then the wave of a child’s hand or the sneeze of a mouse.

(Massive forest fires are another example, where a “cause” is always attributed as an object of blame. If it’s not a lightening strike, it’s a poorly doused campfire. Or perhaps an indiscriminate smoker. But the conditions are predetermined; the catalyst is arbitrary.)

Reacquainting myself with events that led to the Great War, I’m struck by what I was taught in school, namely that there were two “causes.” First the assassination of Archduke Franz Ferdinand, which even my teachers didn’t take all that seriously. He had no legal heir to throne, there was not great uproar over his death. So to add some validity, the second posited cause was “ultra-nationalism” - nationalism being a common pariah among globalists.

Again, rather than a preventable cause, I see something more deterministic. If a vastly growing Russian army had been tolerable to Germany, the Franco-Russo Entente could not have been. Austria-Hungary and the feuding nationalists in the Balkans aside, virtually each day Germany found itself in a position where not to attack in a likely unwinnable war also increased the likelihood of – in the long run – being erased from the map.


To this second point, stunned again to rediscover how hard – in fact, how desperately – royalty among the eventual combatant nations (many of them related by blood or marriage) fought to avoid widespread conflict. For that matter, even the military elite, where you always find doves and hawks, tended to cancel each other out at worst and lean toward limited actions for the most part.

If Ferdinand had not been assassinated in 1914, war was still determined. Perhaps a few years later, but inevitable. Pebbles do not create (or prevent) tidal waves.

More bluntly, Edward Lorenz never argued that killing butterflies would prevent hurricanes.
Posted by Bryan Lindenberger at 9:46 AM No comments:

Confound your co-workers!
Astound your friends!
Sound in control despite having no idea what is going on!

Try out the Random Jargon Generator for Business and #Marketing.

Could be a raise in it, if you don't get fired first.

Those Monday morning meetings will never be the same. 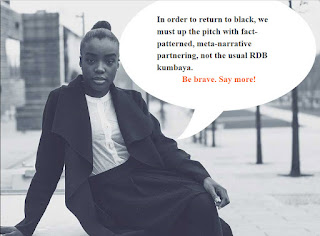 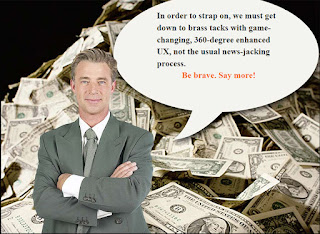 Posted by Bryan Lindenberger at 4:09 PM No comments: