You might confuse Gores Landing Unit WMA with the park just a quarter mile up the road from it, Gores Landing. Gores Landing, the park, offers fishing, picnic area, and amenities for only $5 per car with an additional $5 for overnight camping.

The Wildlife Management Area discussed here is purely for fishing, hunting, and of course hiking. Parking and entry are free, and the map below will get you there.

Gores Landing Unit WMA is part of the Cross Florida Greenway (Marjorie Harris Carr Cross Florida Greenway if you really want to get fancy, but that is a mouthful!) and you can find various parts of that here. I strongly recommend using that site to find parts of the greenway, as Google Maps can lead you all over and to useless locations. This portion, the Gores Landing Unit, seems a portion only I have stumbled across to map and is not even listed on the Greenway site.

But it's wonderful. These trails through Ocala National Forest consists partially of old roads such as Coyner Road seen on the sign below, but they are now closed to motor traffic. I'm not sure the trails/old roads are maintained, but they are clearer and easier to follow than most you can find and quite wide.

Starting at the main trail head, veer right at the first break you reach in a small clearing, and it will lead you to a very nice spot along the Ocklawaha River. I saw plenty of fish in summer and spring, and the view is beautiful with bird sightings year around. There and back will take you just under 3 miles, and there are other trails to follow.

Posted by Bryan Lindenberger at 4:30 PM No comments:

Two Time-Wasting Problems with Job Calls, How to Correct Them 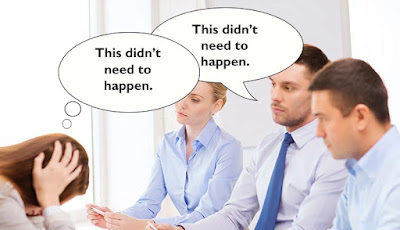 I have the good fortune to work at a company where my role was clearly outlined before I started. The high brass read résumés and background material to find a likely fit based on capacity and experience, so the interview came down to getting to know each other through hammering out specific goals and outcomes. I say good fortune, because I’ve found these instances the rare exception rather than the rule in the vague field we umbrella under “Marketing and Communications.”

So why after weeks or months planning, gathering résumés and even preliminary interviews is the potential employee so often seemingly unprepared? Or clearly a bad fit? It wastes everyone’s time, including every individual in the hiring committee, but also the applicant.

I’m going to discuss two simple but frequent problems that lead to these situations, and offer simple solutions – solutions so basic, I am amazed they are not common practice.

Problem 1 – Few in the hiring committee actually understand the specifics of the position, but try to approach the interview as subject experts
This sounds unlikely, but it makes sense really – you hire someone not just for things you don’t have time to do, but often for things you don’t know how to do. Admitting that you are not the expert in the logistics of particular role is a first step.

A buddy of mine in Nebraska owns a digital development company. He gets some mighty strange requests from businesses and institutions that one day realize, “Hey, maybe we should be on this Tweets-Web-Thingy too!” His clients request such things as “How much will a hashtag cost me?” presumably meaning the hash-phrase, not the symbol itself. It’s a humorous request for most of us, but the problem is that they get upset if he won’t sell them these “hashtags.” In their minds, he just doesn’t know what he is doing.

This sort of situation arises in hiring staff as well, leading to uncomfortable situations. What happens often is that these kind people on the hiring committee – very smart people, just lacking experience – hide their lack of knowledge by focusing on the mundane or, conversely, the philosophical. “What is your philosophy of social media?” or “What is your approach to AdWords?”

No one asks a plumber what is his philosophy of PVC lubricant, or a drywall installer “What is your approach toward walls?” Uhm, facing forward?

The more you know – the more you simply do these more mundane aspects of overall communications or marketing strategy – the harder these vague, “Oprah-style” questions can be to answer. It can actually weed out the most skilled experts who arrive armed to talk about real success, real ROI and strategy, real outcomes of his or her work. My philosophy is to increase social media engagement by 1000% in 3 months by re-engaging existing audience even before I worry about growing new, and raising resultant web sessions by 25% while including stronger and easier-to-find and understand calls to action leading to increased contact with potential clients.

Seems a reasonable answer.
Eyes glaze over.
“Uhm, but…what is your philosophy?”

Solution
We hit on it with outcomes. It’s okay to not understand the technical aspect of the position, that’s why you are hiring an expert! Steve Jobs didn’t need to know the intricacies of coding even though critical to his business. But you should have an idea of the outcomes you desire. Greater enrollment, increased donations, stronger connections with stakeholders, even something as mundane as expanding social media reach (though I would argue that is a means, not an outcome), or better internal communications to reduce employee turnover. Whatever it is, you almost certainly have some outcome in mind, goals to achieve those outcomes, and your job is to find someone to achieve them.
In interview, identify for the interviewee the problems or challenges you face from your perspective. Look at past work of the interviewee and ask if he or she can achieve similar outcomes for you, in your particular circumstance. As with approaching any paid professional – a doctor for instance – you explain where the pain is, with the goal of relieving that pain. If you have no pain, no outcomes in mind, if everything is fine and you just want someone who fits into the status quo, then you have to ask, why are really you hiring?

Problem 2 – We keep getting unqualified people, how could this happen after our committee spent so much time on the job call?
The problem here lies in the question itself: one word: “committee.”

I’ve participated in these committees on the hiring side and the dynamics are always the same. You might have six people of vastly different backgrounds, each throwing in what he or she believes the job should entail. If one person has five ideas, then everyone feels obligated to offer as many, no one wants to be a wallflower, and soon you’re up to 20-30 skills from five or six entirely different professions. And that’s before HR gets involved and adds their own requirements based on a handbook last updated in 2009!

I applied once for marketing role with 30+ explicit duties that ranged from research and analytics to writing press releases and features, with graphic design, social media, and videography and editing thrown in like croutons on the salad. The call went on to 30 different skills and included at least 5 different fields. Understandably, people have to wear a variety of hats these days, and I pride myself with working and learning across traditional lines. But they wanted an expert in each, and the punchline is that they required only two years’ experience and an associates’ degree!
Turns out, they wanted a graphic designer for print.
The committee had to be so frustrated, all gathered and setting aside respective schedules, as did I, to find that graphic design was my weakest area on their expansive list. Maybe it should have been at the top of the list? Maybe even in the job title.

Solution
Hold that committee meeting to flesh out duties for the prospective hire. Get that input. It’s necessary, let’s be honest, for political reasons. Everyone wants their say, even if they pretend they don’t want to be there.

After that, consider that list as still in the “idea” phase and pass it onto - this part is critical – the person to whom the new hire will directly report. Have that director or manager sit on the list for a week or better yet, carry it, going through the usual work routine and noting gaps in what needs accomplished. “Hmm, seems I could really use a graphic artist for this project” or “Our graphic artist does beautiful work, but it gets no response – we need someone good at focus groups, surveys, and data analysis to find out why we aren’t reaching people!” Whatever. Maybe a consultant will be better in the latter case, and the consultant will say you need better web and social media management. Then, hire one of those! Just remember that the list isn’t a Christmas wish list or a wedding registry; it’s a list of critical elements that you need expert help with yesterday.

From that list of three to five critical elements, now organize them by importance in two categories. These are 1) Which is most critical and lacking in the current structure, and a second list of 2) what the person will spend the most time doing. For instance, you might most desperately need a videographer and video editor (already, two separate professions at expert level) but most of the time will be spent developing and writing copy. Two lists of the same items in two separate orders.
If the list cannot be narrowed down thusly, you have other problems, which may include 1) needing to hire more than one professional or 2) lack of utilization of existing resources, which may call for some serious meetings and “restructuring.” Candidly, half the time a large bureaucracy seeks to hire, what they first need to do is trim some of the fat. Pick up that phone and discuss with the president, director, or dean the hiring of a consultant, before they do it themselves.

Bryan Lindenberger is a freelance writer with an M.A. in Communications who has worked in business planning, grant development, managing education programs, and marketing, and who welcomes new connections at LinkedIn.
Posted by Bryan Lindenberger at 10:55 AM No comments:

Little Blue Heron on the Hunt

Posted by Bryan Lindenberger at 3:57 PM No comments:

The ancient fetish of appeasing gods by placing worldly possessions upon an altar survives in modern religions to this day. In this dark fantasy short story, an apprentice priest providing this service becomes embroiled in the timeless consequences of serving two masters.Hunger of the Gods
“To die for a religion is easier than to live it absolutely.”—Jorge Luis Borges

http://www.bryanlindenberger.com/hunger-of-the-gods.html
Posted by Bryan Lindenberger at 9:24 AM No comments: